When we say Greenhouse Expert, we think of Mike Brouwer

Mike Brouwer, owner of Clear Choice Glass Construction, is the exclusive representative for BC Greenhouse Builders in the Fraser Valley cently I had the opportunity to connect with Mike Brouwer, owner of Clear Choice Glass Construction, about his history with BC Greenhouse Builders.  Mike is what we would call a ‘legacy employee”.  Legacy to us means someone who has been with the company for an extraordinary amount of time, adds incredible value and improves the company over the years through their dedication and hard work.

“It was the spring of 1981 that I worked at BCG for the first time, but that was before I was actually hired. I came in on a Saturday morning to help my friend John so that he could finish early and hang out with friends that afternoon. Helping him pack glass was my first experience and I am not even sure Henry or Greta knew. Henry contacted me after talking with my high school shop teacher Mr. VanderBos who recommended me for the job. I was 18 years old. This summer it will be 40 years since the beginning of that relationship,” Mike says. 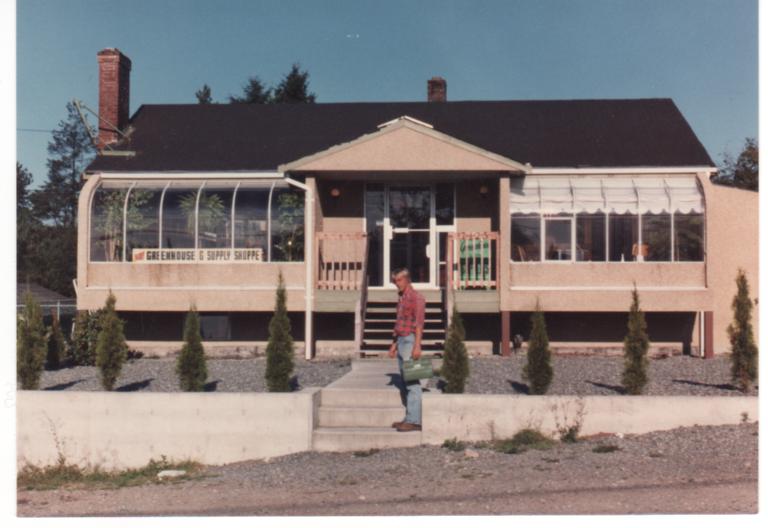 Mike at the old shop on Hedley Avenue in Burnaby in the 1980’s. Henry Heinen had this to say about Mike Brouwer:  “Any greenhouse, no matter what size or how custom is was, it was no problem because we had Mike.  Mike is a person that will figure it out. He works hard and smart with a smile. In Mike’s time with the company there were no specialists.  Every aspect of building a greenhouse was done by each person.  When installing a greenhouse, sometimes the foundations were not square or level.  Mike would figure it out and work around it.  When it was all done, the customer would be very happy.  The inside joke is that if a piece of aluminum is cut short, Mike would find a way to stretch it.  Many times I threw Mike to the wolves and he keeps coming back.  We had some great times together. He’s my friend.”

I asked Mike to share some moments that have stood out to him over the last 40 years.  He mentions that he started with a pretty good view of the business as he was in the shop fabricating, installing in the field and assisting customers that were picking up their greenhouses too.

He distinctly remembers Saturdays at the shop as Henry and Greta’s boys (Rick, Jay and Wayne) who were around 10-13 years old would come in and clean up in the shop and do caps and small stuff. Sometimes there would be a Saturday install and the boys would come along to help.

“Customers would often be surprised that these young kids were helping put up their greenhouse, but they would always be impressed when the work was done and the greenhouse completed,” he says.

This project was Mike’s first custom build in his own shop in Abbotsford.

Mike recalls the year that Henry and Greta decided they wanted to take their whole family to Australia for six months. “By that time, I had moved out of doing field work to mostly working in production and helping with sales. Henry and Greta felt they had enough people in place that they were free to leave with the family to Australia and they were able to run the business from a distance for six months while they were away.” As anyone in business knows, this is the greatest show of confidence in the team that you have built.

BC Greenhouse Builders currently has over 25 retailers all over the world but at that time, we were still in a growth mode. I asked Mike how Clear Choice Glass Construction was formed.

“Every so often Henry would sit down with me and we would have a coffee together and he would ask where I could see myself within the company in the next 3-5 years. So, I think it was in the spring or summer of 1993 that we sat down and I told Henry that my wife Marguerite and our young family would like to move to Abbotsford.”  At this point, Mike had been with the company for 10 to 12 years and with their blessing, he created an exclusive partnership representing the company in the Fraser Valley. Henry and Greta helped to make it happen by selling Mike the old blue Ford 350 flat deck truck for a dollar and helped to make sure he had enough work to support his young family for those first years.  It’s now been 25 years and Mike is one of our leading greenhouse experts who not only services the Fraser Valley with sales and installations but assists with fabrication of specialized custom projects for customers across the US and Canada.

“I love my job and one of the things I like most are the people. I do enjoy the physical part of building, using my hands and seeing the finished product at the end of the day. It gives me a sense of accomplishment but I think the people can really make the day. When customers greet you with a smile and often express their excitement and appreciation for the work being done, that is rewarding. I think part of it is because most have been dreaming about getting a greenhouse for quite a while. I may be biased, but it probably doesn’t hurt that we sell a great product,” Mike says. Mrs. Sellars project stands out as one of the early builds I did for BCG in the fall of 2005 and one of the most enjoyable customers.

“I have been blessed with working at BCG and the people that I have met. I have also had the opportunity to employ a number of great people over the years. It truly feels like I am a part of the team and I hope we are able to continue to work and have a good time doing that together,” says Mike Brouwer. Rick Heinen, owner of BCG, says this about Mike:  “I have always enjoyed working with Mike Brouwer for all these years. We have had a lot of fun together. He has been a big part of helping BC Greenhouse grow and is so loyal to the company. He has always been a smart greenhouse fabricator and installer who improvised when he needed to, to make the job work. With his knowledge, BCG kept pushing the envelope in tackling new projects. His honesty and integrity is something I always admired and I am proud to call him a friend.”

I think it always comes back to the idea of a family business.  As we know, family is made up of many different people and this company has grown and prospered because of people like Mike.

Thank you for all that you have done Mike.  You truly are a legacy!